This site was designed with the
.com
website builder. Create your website today.Start Now
Get the Clear Skin eBook

My Zuska's Disease: A Long Journey to a Devastating Diagnosis

This is the most personal post I have ever written. When I wrote it back in 2016, I don't know what I was expecting to achieve - but I never anticipated the outpouring of messages I received from people experiencing the very same issues. The confusion, the recurring infections, the painful surgeries, the lack of answers or treatment options.

I remember feeling so alone and hopeless, much like I did at the beginning of my acne journey, only much worse. I spent most of my days crying and ruminating.

This was a very alienating experience, and due to its intimate nature I had an even harder time coping. Regardless, sharing my Zuska's journey, like sharing my acne journey, has helped me heal personally, and from the e-mails and messages I received, I can tell that it has helped others, too.

Let's start at the beginning.

It was January of 2014 or so. I remember there was a lot of snow on the ground and it was very cold. I was at work, and suddenly having these terrible breast pains in my left breast. I chocked it up to hormones, as breast soreness is not unusual for me. The pain was not like my usual breast pains, though. However, only having been off the pill for a few years, my body was still prone to all kinds of changes.

After a couple of days, the pain had still not gone away. It was constant. It physically hurt to wear a bra, and I felt completely side-tracked in my daily life. I couldn't focus on anything except the pain.

I came home from work one day and noticed that my breast was now swollen, inflamed, itchy, and red. The pain had now spread from my breast into my underarm area. Mortified, I also found a small, pea-size lump just under the areola. My first thought was breast cancer. Although panicking and concerned, I decided to wait it out and monitor for any further changes.

My period came and went, but the breast pain never went away.

A couple more days later, my breast was now extremely swollen, and I had a fever. Not knowing what else to do, I went to the Emergency room. This was around February.

I sat in the waiting room feeling stupid, like I shouldn't be there. The nurses treated me kindly, but I felt like they were thinking the same thing. People were there with broken limbs and concussions, and all I had was a sore boob.

I felt like an idiot, but I didn't know what else to do. I was scared and the pain was debilitating, and consuming my life.

In the semi-private exam room, I felt sick, weak, and light-headed. All I wanted was for the pain to go away.

The RN took one quick look at my breast and diagnosed me with a simple case of mastitis. I was given an antibiotic and sent on my merry way. She didn't ask me any questions about whether or not I was a smoker, or whether or not I was breastfeeding. And frankly, she didn't seem concerned. She was practically walking out the door as she was talking to me.

So, on her expertise, I didn't think any more of it. Just a simple case of mastitis. It will clear up with with some antibiotics.

And I thought, okay, phew, this is over.

I took the antibiotics, and as expected, my infection went away. I was thrilled, thinking I had seen the last of that immense and ineffable pain. I didn't care what it was, as long as it was gone.

I didn't understand. Why had it come back, and so quickly? So, I looked up more information on mastitis. I had heard of it, but didn't know what it was, really.

Mastitis is just a very general term for inflammation in the breast. It can be the result of many factors, but is usually caused during lactation, or as a result of smoker's gunk "plugging" up the breast ducts.

The pieces of the puzzle still did not seem to fit together. I'm not a smoker, nor have I ever been lactating or pregnant - why did I have mastitis?

This time, I went to see my family doctor, and he prescribed me another antibiotic - Norflaxacin. He didn't seem concerned.

I didn't get any answers or follow-up appointments at this point, only more medication to treat the infection. Again, the problem was out of sight, out of mind for the time being. 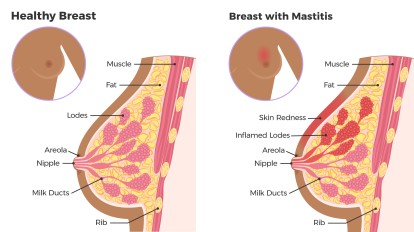 Unsurprisingly, the infection came back a third time.

I should add that the lump never really went away during the antibiotics, just laid dormant for a month or two until the infection began again. It could always be felt just under the areola, but wasn't growing.

Somewhere around this time, although I cannot recall specifically when, my infected breast lump developed a fistula (sometimes called a sinus), which is an abnormal connection between two spaces. This is generally a pathway that develops so that an infection can drain - the body's way of getting out the bad stuff. This occurs in up to 50% of patients with abscesses. In my case, this fistula developed between the infected, pus-filled lump, and the outer layers of my skin.

I noticed this fistula developing when the lump produced a small, pimple-like whitehead of pus. For a while, I didn't know what it meant, and nothing changed. However one day, a shooting pain in my breast caused me to rush to the bathroom and check on it. It felt like someone had taken a needle and stabbed straight into my breast. It took the breath right out of me.

In the bathroom, I saw that the pus-filled lump had burst, and pus was draining out. It was more pus than anyone cares to see come out of a delicate area like the areola. I now had this little hole (about the size of a pin head), leaking pus and blood. I had to stuff my bra with tissue to prevent it from leaking through my clothes, and I had to change the tissue frequently.

I panicked and booked an appointment with my family doctor again. This time when we met, he agreed that it was cause for concern and he sent me to see a specialist.

Clearly there was something not being addressed.

It took a couple of weeks to get in to see the specialist, and in this time the infection returned and I was on antibiotics again.

In the mean time, I also tried all the "natural" remedies I could think of (like iodine and colloidal silver). But nothing seemed to help.

My specialist was kind and knowledgeable, but I did not feel like he took my condition seriously. Little did he know we were in for quite a long ride together.

He sent me for an ultrasound, and the results came back inconclusive. My breast tissue was very dense (as is most breast tissue of a 20-something-year-old), so this complicated a proper visual. Breast ultrasounds and mammograms are unfortunately fairly useless in young women, according to him.

To put one of my bigger fears to rest, the specialist was able to rule out cancer as I didn't have any tell-tale symptoms like an orange peel-like appearance, scaliness, extreme swelling, etc., and had been dealing with this issue for over 6 months with no other serious progressions.

Not knowing what else to do but get my serious infection under control before it turned worse, my specialist gave me another round of antibiotics.

At our next appointment, we decided that the only way to see what was going on was to schedule surgery. This was at least the fifth time the infection had come back and I was on antibiotics. He knew, and I knew, that we couldn't keep up this charade with antibiotics and we had to try something else.

Unfortunately for both of us, it was going in blindfolded. We didn't know what to expect, since he couldn't see anything on the ultrasound. He didn't know what he was looking for, and so he didn't really have a plan.

I felt like I knew absolutely nothing going into the surgery. It was a very confusing and scary time.

The weekend of my birthday in November of 2014 I went in for surgery for a subareolar excision. The specialist essentially cut a small triangle of my areola to get to the infected duct. During this surgery, the visibly-affected duct and surrounding affected area were taken out.

I recovered well, and for several months it seemed like the problem was finally gone.

Under the scar tissue, I could no longer feel the lump. I was happy with my post-surgery aesthetics, and I thought all of this was in my past.

The pain in my breast returned in February of 2015. It was the same minor swelling, infection-like pain that resembled the pain of the first lump. Then the fistula developed again, and the same pimple-like whitehead appeared.

I don't even know how to express my level of devastation and frustration.

I was doing A LOT of searching online, as one is wont to do when they have no answers from doctors. But I never came across anything ground-breaking.

Whatever it was, the outlook did not look favorable, and a full mastectomy came up several times in my searches.

I loathed the idea of having my breast removed simply because of a non-cancerous infection that we couldn't find the cause of.

I pushed the idea out of my mind, sure that it couldn't possibly resort to a mastectomy.

On February 28th 2015, having been officially discharged as a "cured" patient after my surgery, I went to the Emergency room and had the new infected lump lanced and drained. I didn't know what else to do.

Unfortunately this did not help with the scar, which now widened and spread as the lancing left a gaping hole in my areola at least 3x the size of the hole before.

And then the fistula came back again.

On March 4th I went back to my family doctor and was given the topical antibiotic Bactroban. It helped calm the infection, but it never got rid of the lump that was now always there.

At this time my doctor expressed the belief that there might be a small pocket of bacteria that simply wasn't being attacked by the antibiotic, which would explain why it kept coming back.

It was either that, or an antibiotic-resistant infection (which he was concerned I had caught during surgery). Neither were very promising outlooks.

After the course of Bactroban, the fistula returned again. This time, unable to get in to see a doctor, and totally exhausted with the constant onslaught of antibiotic treatments, I was forced to drain the fistula myself. I had to do this in order to release the infection and to stop the fever and the pain. It probably wasn't the best thing to do, but I felt like I had no other option.

By now, my nipple was becoming disfigured by constant infection, healing, and re-opening of the fistula. I was also beginning to worry that the infections would lead to complete and irreversible nipple inversion.